Eric put the stack of printouts into an orange folder. Olivia had sent him a spreadsheet with rework totals for the leaky door gaskets. Jenny-Lynn had sent him the pricing and MOQs that Patrick would want to see first. The young engineer checked his smartwatch and knew it was almost time for his meeting with Purchasing. He took a deep breath, pushed his chair away from his desk, and stood up.

“You can do this,” he told himself. “Today, talk about true costs. Next week, worry about your annual performance review.”

Eric walked down the hallway with the orange folder in hand. He nodded to a few colleagues, older engineers who could probably count the days until their retirements. The young engineer made the twists and turns to the Purchasing Director’s office. When he arrived, the door was closed. It sounded like Patrick was on a call – one that wasn’t going well. Eric knocked on the door and waited for a response.

Patrick was on the phone but motioned for Eric to take a seat across from him. The engineer quickly obliged and watched the Purchasing Director hang up the phone and shake his head in frustration.

“Vendors,” Patrick sighed. “They all and promise the lowest price, but then they can’t deliver.”

Patrick paused and smiled, but in a way that didn’t look entirely friendly. “Do you understand what I mean, Eric?” he asked.

“Actually, I do,” the engineer replied confidently. “Sometimes the lowest price comes with greater costs than anyone could have foreseen. That’s when it’s time to look at the numbers.”

“Now you’re talking my language,” Patrick replied. “It’s about the numbers. So, let’s look at the pricing and MOQs you said you have. Who is this gasket company again, and what do they know about tractors?”

“They’re Elasto Proxy,” Eric answered. “They’ve been part of the heavy equipment industry for 30 years and are a lot more than just a gasket fabricator. Anyway, I have what you asked for.”

Eric opened the orange folder, removed Jenny-Lynn’s quote with the pricing and MOQs, and handed it to Patrick. The Purchasing Director scanned the numbers and pushed the paper away.

“That price is higher what we’re paying now,” Patrick said. “The MOQs look good because we don’t want to carry excessive  inventory, but this won’t cut it.”

Eric was ready for a response like this. He opened the orange folder again and removed the spreadsheets from Olivia. He handed them to the Purchasing Director, explained what he’d learned about true costs, and began with the $200 in material waste.

“It’s not good that they’re wasting material,” Patrick acknowledged, “but it’s a $10 door gasket. Even if the installers discard two per tractor, it doesn’t really hurt our profits.”

“Material costs are the least of our problems,” Eric said evenly. “Take a look at the second page of the spreadsheet.  Do you see the labor costs when Isaac does the rework?”

Patrick looked, read, and then frowned. “Even with a check to the head,” the former hockey defenseman grumbled, “I couldn’t miss those numbers. Our burdened labor rate is $100/hour, it takes Isaac an hour to do the rework, and he’s done 100 gaskets so far. That’s $10,000 in labor costs already.”

“It get worse,” Eric says. “Take a look at the third page of the spreadsheet. It takes Irene two hours to remove a bad gasket and install a new one. It’s a good thing that Isaac hasn’t retired yet, because our burdened labor rate would have us spending $20,000 on just 100 gaskets.”

“This is crazy,” Patrick exclaimed. “We can’t spend money like this on a door gasket. What is Operations doing to fix this – and what are YOU doing to help?” 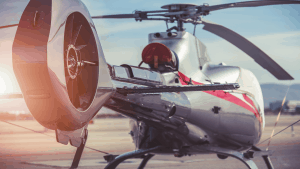 A heat shield blanket is a specialty textile that provides thermal insulation. Elasto Proxy makes them for fixed-wing and rotary-wing aircraft.