What is Santa’s sleigh made of? Some claim that St. Nick’s red ride is made of wood, metal, plastic, or composite materials. Others claim that Kris Kringle’s vehicle has a nanostructured skin that reduces drag and controls stability. The truss of the sleigh, the aerospace engineers say, has lightweight runners made of a special titanium alloy that the scientists at NASA want for Christmas.

We believe that Santa Claus is magic, of course, but how does he keep his sleigh so quiet? Which materials does he really use? It’s been years since Clement Clarke Moore penned Twas the Night Before Christmas and complained that “out on the lawn there arose such a clatter, I sprang from the bed to see what was the matter”. Surely, no regulatory agency would tolerate this kind of noise pollution today!

Here at our headquarters in Boisbriand, Quebec, Canada, we’re a bit closer to the North Pole than most. Our manufacturing facility isn’t Santa’s Workshop, but Elasto Proxy designs and custom-fabricates rubber parts that would make Père Noël proud. That’s why, after careful consultation with our skilled craftspeople, we believe that Santa’s sleigh uses sound-dampening bumpers.

Santa may be a skilled pilot, but he can’t risk waking up the kids. Local weather conditions vary, and even the North Pole’s best meteorologists can’t predict whether a sandstorm in the Gobi Desert will make for a noisy landing near a Mongolian child’s yurt. There are also landings on snowy rooftops to consider, and a rubber bumper on the front of the sleigh is a nice safety feature.

Does Santa’s sleigh have doors? When Father Christmas was younger, maybe he liked to leap over the side of his sled so he could slide down your chimney that much faster. Now that Santa’s a bit older (and heavier), and with so many advances in sleigh technology, Jolly Old St. Nick probably prefers a Cadillac-style vehicle to a convertible.

Purists may say that Santa Claus would never put a roof on his sleigh and use acoustic foam to improve the sound quality of his stereo. Yet those high-altitude winds can make a cup of hot chocolate grow cold quickly. At a minimum, a good luxury sleigh would need EPDM door seals. They’re weather-resistant and can withstand temperature changes between places on Santa’s route like Montreal and Miami.

St. Nicholas doesn’t spend a lot of time in his sleigh each year, but he works hard when he does. Slogging through snow and mud is a messy business, and it’s easy enough to spill some hot cocoa if one of the reindeer suddenly sneezes. Plus, there are all of those stops to consider. Santa can’t afford to slip and fall when he’s entering or exiting his sleigh or lose traction when tapping his toes to Jingle Bells.

That’s why Santa’s ride is equipped with rubber floor matting or maybe even a rubber floor liner. It’s easy enough to think of his sleigh as an aircraft, but it’s also an off-road vehicle. When you’re landing on farms, in forests, and near job sites, interior carpeting just won’t cut it. Resistance to motor oil, gasoline, and battery acid may not be required on a reindeer-powered ride, but foam rubber flooring is a must.

Is Santa’s sleigh equipped with the latest electronics and gadgets? Does he use a global positioning system (GPS) to map out millions of destinations and find the shortest route to each one? Does he need to monitor his speed to ensure he’s not traveling faster than the light from Rudolph’s red nose? If Mrs. Claus needs to reach him about a problem with production, is there a radio communicator on-board?

Rubber products are also used to protect instruments from the elements and to help seat and protect electronic devices within instrument panels. Why would a high-tech ride like Santa’s sleigh lack these specially designed and custom- fabricated components? From bulb trim seals to edge trim, and from weather stripping to window channels, it’s easy to see a role for rubber in Santa’s sleigh.

From all of us at Elasto Proxy, we wish you a very Merry Christmas and a peaceful and prosperous New Year! Please note that our offices close at noon on December 24. Regular business operations resume on Monday, January 6.

Green Power and the Art of Sealing 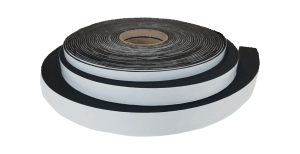