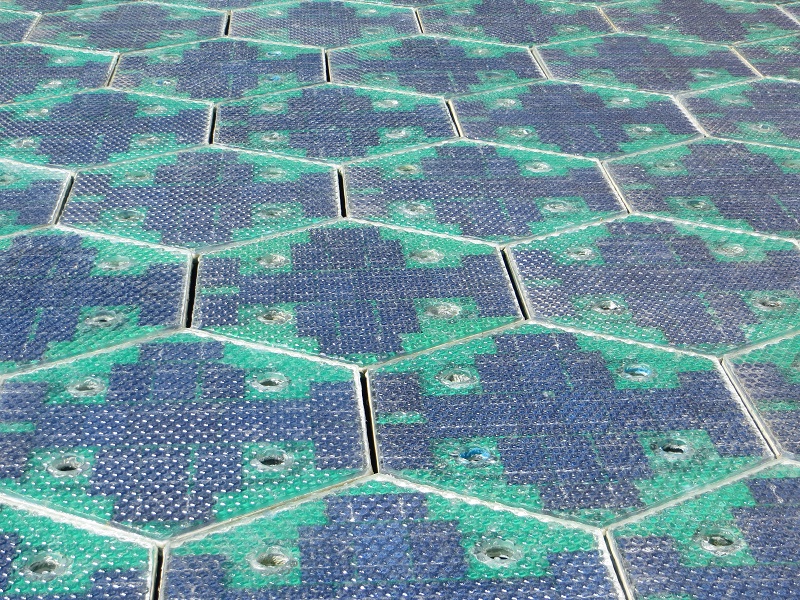 How strong are solar panels? Would you stand on one and jump up and down? Would you park your car atop a solar array, or drive across photovoltaic cells at a high rate of speed? The exposed surfaces on PV panels are made of glass, but not annealed glass – the type that’s used in wine glasses, beer bottles, and some windows. Instead, solar panels use tougher, tempered glass. But just how strong is it? And could roads made of solar panels survive demanding environments like a Canadian winter?

According to Scott and Julie Brusaw, the founders of Solar Roadways, solar panels can be built so strong that you can walk, park, and drive on them. Backed by multiple phases of funding from the U.S. Federal Highway Administration (FHWA), the couple’s company is finishing a prototype parking lot and planning for production. At Indiegogo, a crowdfunding website, Solar Roadways has already raised 196% of its $1-million goal. The technology is popular, but what about practical?

Originally, Solar Roadways planned to design panels that could support 80,000 lbs., the legal limit for tractor trailers in many jurisdictions. After learning that oil companies can move refinery equipment up to 230,000 lbs. across frozen roads, the solar startup aimed for a maximum of 250,000 lbs. instead. As the FAQ section of the company’s website explains, both 3D finite element method analysis and load testing at civil engineering labs has demonstrated that these PV panels are up to the task.

Solar roads may be tough enough to withstand heavy weights and hard winters, but can they produce enough electricity to be cost-effective? For that matter, would panels even “pay for themselves”, as the Indiegogo page claims? As Solar Roadways admits, its panel prices are not yet available. Until prototype costs are captured and a production cost analysis is completed, critics (and even some supporters) will ask questions as tough as the panels themselves.

To its credit, Solar Roadways appreciates that “engineers love numbers” – and updates a web page called The Numbers daily. Among the assumptions is that there are 31,250.86 square miles of roads, parking lots, driveways, playgrounds, bike paths, and sidewalks in the 48 contiguous U.S. states. Given its product’s capabilities, and based on test results, Solar Roadways claims that covering these surfaces with its PV panels “could produce just about enough electricity to supply the entire world.”

Road builders need to consider all of their costs – and all of the benefits – before starting projects. In addition to generating electricity, Solar Roadways are designed to serve as reservoirs for storing and treating stormwater, and as corridors for power and data cables. It’s not just a matter of tearing up old asphalt and replacing the roadbed with solar panels then. There are subterranean structures to be built, and effects on flood control, public water supplies, and electrical distribution to consider.

Then there are rats – unwelcome inhabitants in many underground structures. As I learned during a recent trip to China, rats in rail tunnels will eat the door seals on passenger cars to access tastier food supplies within. These doors seals are made of rubber, as are many seals for industrial applications. For the designers of solar roadways then, it’s important to look beyond the PV glass – especially in cities. Material selection also matters for any sealing that’s used between interlocking solar panels.

Here in Quebec, where Elasto Proxy is headquartered, overhead wires are especially vulnerable during winter months. During the Ice Storm of 2001, for example, thousands of lines were downed and then repaired at considerable cost. Using solar roads to put power lines underground could prevent such power outages, and appeal to those who would rather not see the wires.

A Canadian winter isn’t the time to build solar roads, however, but when’s the best time to see if Solar Roadways will really work?

What are your thoughts about solar roads? Join the conversation on our social media sites. Look for a post with a link to this blog entry on LinkedIn, Facebook, Google+, and Twitter. Elasto Proxy has a YouTube channel, too.

Finally, please subscribe to our free e-newsletters. They’re a great source of information delivered right to your email inbox, and they provide links to blog entries like this one.