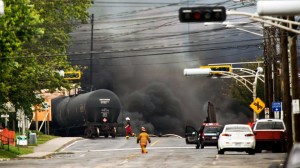 Lac-Mégantic is a town of 5,900 that sits on the shores of a freshwater lake near Quebec’s border with Vermont.  According to the area’s original inhabitants, the Abenaki, the word Mégantic means “place where fish gather”. What most people now know about Lac-Mégantic, however, is that it’s the site of a recent train derailment marked by fire, death, and unanswered questions.

On the night of July 6, 2013, an unattended freight train rolled down a 1.2-degree grade and picked up speed. By the time the runaway train reached a curve in nearby Lac- Mégantic, the locomotive and all 73 cars were traveling too fast. Owned and operated by the Montreal, Maine, and Atlantic (MMA) Railway, the freight train included 72 tanker cars carrying crude oil from North Dakota to New Brunswick.

Although firefighters extinguished a blaze in the locomotive, explosions rocked Lac- Mégantic during the early hours of July 7th. While much of the downtown was immersed in oil and fire, as many 30 buildings were destroyed. Over 1,000 residents were evacuated from their homes, with some still unable to return. Today, a boil-water advisory remains in effect for the “place where fish gather”.

As a family-owned company based in Boisbriand, Quebec, Elasto Proxy is saddened by this tragedy that has now claimed 15 lives with 60 people missing.  For those of us who visited Lac-Mégantic before the train derailment, our memories of this beautiful community are fond ones. We will keep the residents of Lac-Mégantic in our thoughts and prayers, and encourage them as they rebuild the place they call home.

Yet we must also ask how similar tragedies can be prevented. Although the cause of the Lac-Mégantic train derailment is still undetermined, CTV News reports that that rail shipments of crude oil have increased 28,000% over the last five years. Billed as a cost-effective alternative to controversial pipelines such as the Keystone XL, oil trains may provide the fuel for a new political firestorm.

Then there’s hydraulic fracturing, the controversial process used to extract the North Dakota crude oil that spilled in Lac-Mégantic. Commonly known as “fracking”, this technique mixes water with sand and chemicals and then injects the mixture at high pressures into a well bore.  According to opponents, the environmental damage from fracking far outweighs its economic benefits.

What place will technology have in debates about Canada’s energy future – and are there ways to make rail shipments of crude oil safer today? Tank spill prevention and containment systems are available, but can they be safely, reliably, and economically modified for railcars? How about fuel bladder containment systems that could absorb impacts and provide high structural strength?

There are still many questions surrounding the Lac-Mégantic train derailment and disaster. What are your thoughts on rail shipments of crude oil? How about fracking and the extraction of bitumen from Canada’s oil sands? Can new containment systems make rail shipments safer, protecting not only lives and property, but also our natural resources? I hope you’ll join the conversation by commenting below.

How Safe Are Your Tires?